A not-really-thought-through plan to quit life and career in the UK and emigrate to New Zealand. How it went. What it meant…. 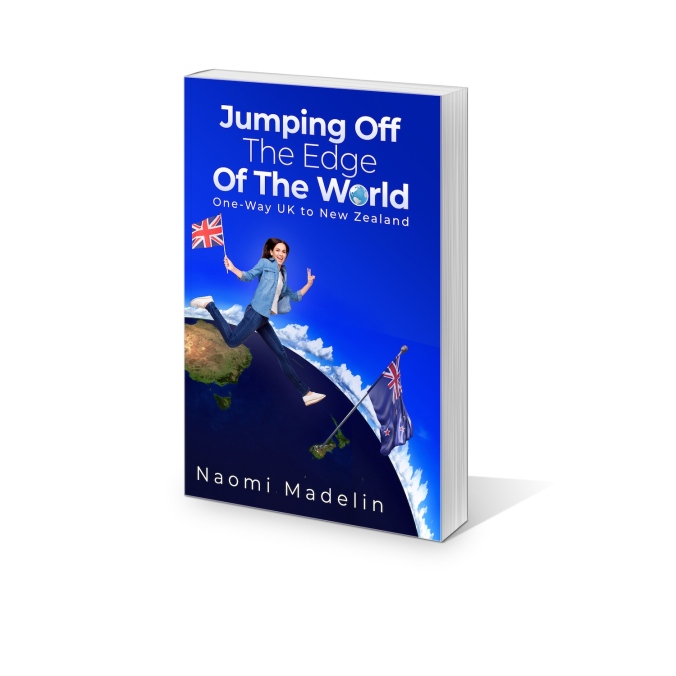 It’s not that her London life is destroying her, but it’s not inspiring her, either. And the fact is, Naomi’s in love – with New Zealand. She feels compelled to throw in the towel on London life; a successful career, friends, night life, and the stability of family nearby.

Is it ill-advised, or boldly fearless? She’s not sure, but she’s selling up and moving to New Zealand anyway, and she’s convinced her boyfriend to come too.

With a plan that reaches about as far as the airport, thirty year-old Naomi and boyfriend James head into the unknown on the other side of the world.

Jumping Off The Edge Of The World captures the humour and the heartache of leaving it all behind and starting again somewhere new. Travelling to New Zealand as a backpacker was one thing, but Naomi soon finds that shipping out and making a life there is completely different. It’s easy enough to say you want to live in the middle of nowhere, but after living in one of the busiest cities in the world – what will it feel like?

In a land where, apparently, every woman wants her curtains cleaned, Naomi isn’t sure how to fit in or what to do. She’s abandoned her old life and is here to find herself – but isn’t she actually even more lost?

Taking her cue from the people she meets, Naomi starts to question her place in the world. Who is she, anyway? She finds a solace in solitude and a place to think, or not think, on the wild, empty, black sand beaches near their new home.

Jumping Off The Edge Of The World is a true and honest, late (or perhaps second) coming-of-age tale of travel adventures, culture shock, soul-searching, leaky houses and smelly jumpers.

Available on  Amazon for Kindle, or in paperback.

Why I wrote it (and when)

I suppose I started blogging before the internet was a thing. In our earlier days in New Zealand I used to compose a regular-ish newsletter to send by email to friends and family. I called it ‘Long White News’. (New Zealand’s original name is Aotearoa – Land of the Long White Cloud.) It was a mixture of way to keep in touch, an outlet for my writing and a way of processing the change we were going through.

After a while I started to think that perhaps my Long White Newses were chapters for a book. I slowly started to pull them together, expanding and editing them, and possibly around 2005 or 2006 I found had a book. I even sent it to a couple of publishers, who weren’t horrible about it at all and suggested it might be best with a UK publisher. I made lists of UK publishers and quiet intentions. Then, as I tended with creative projects that came from my heart in those days and the days before, I lost faith. Lost nerve. Those glimmers of confidence waned. Other life too over.

By 2011 the internet was most definitely a thing. Our marriage was a bit of a mess and I guess I was focussing on finding me again. I started Jumping Off Books on blogspot (a fact I only very recently remembered!),  moving it to WordPress in 2013.

Scroll forward numerous years and that book I’d finished was niggling at me. I revisited, re-edited, proofed. Then found more reasons to procrastinate. I started writing a children’s book. It was hard. But I persevered.  Still my finished book was niggling me.

So after numerous missed personal deadlines, this year I finally did it. No need to wait for letters or emails back from publishers now!  After reading my book yet again and feeling excitement, tingles, nerves, detachment and a host of other things, I finally put a stake in the ground, worked out what needed to be done, did it, and there it is.

If you’ve read this far you’d better get it! Please do leave a review on Amazon, good or bad, Feedback means a lot either way.

Well, obviously I have to finish the children’s book. And there’s a collection or two of haiku I’d like to put together. But having published Jumping Off Books I feel a sequel is in order. Because that was only the start of it. And I have all those blog posts to draw on – so watch this space to find out how we suddenly got married, designed a product and launched a business, found out more about how remote New Zealand is, had some babies, hiked some long trails, got into mountain biking and fell out of love…